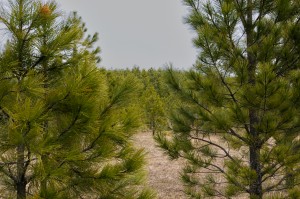 Early settlers to the Palouse subsisted on crops grown on the regions fertile soils.  Often they had to clear timber from their homesteads to create farmland.  Over time, they converted hundreds of thousands of acres of timberland into farms.

This deforestation has resulted in impaired water quality in many of the area's streams.  For most of the streams, water quality can be recovered by afforestation, the act of reclaiming farmland by planting trees.  Over the past several years, Bennett Lumber has reclaimed over 2,000 acres of farmland.  Eventually these lands will revert back to forests, with the same native flora and fauna found adjacent timberlands.